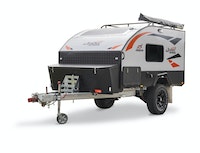 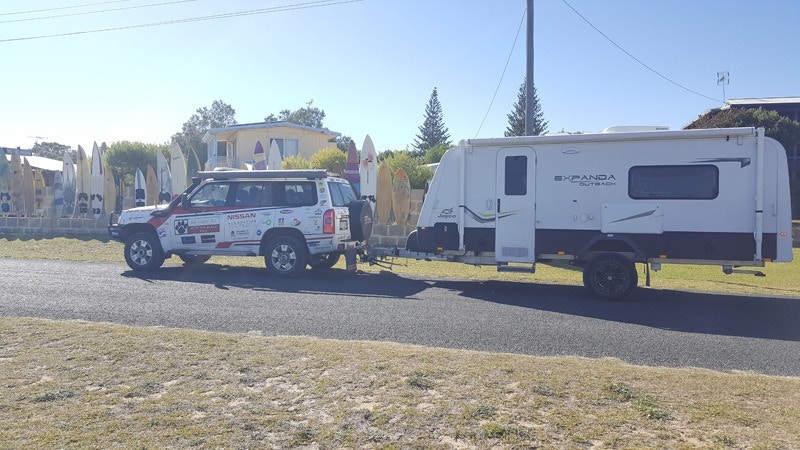 Whyalla has a lot to offer, and Deb telling us about the Winter influx to town of people wanting to snorkel/dive with the Giant Cuttlefish at Point Lowly had us adding this experience to our list for the future!

We enjoyed the drive down the coast towards Port Lincoln and on to Coffin Bay. The Eyre Peninsula is just beautiful! The Coffin Bay Caravan Park had given us a powered site for three days, and having heard great things about the area, we were most grateful! Being school holidays in South Australia, there were plenty of children for ours to play with, leaving Paul & Kirstine to catch up on some blogging and picture editing. It’s a neverending process, but oh so important to document our experiences and interactions with people. The blog will be the first place Kirstine looks back to as a memory jogger as she starts writing the book!

We went for a drive back to Port Lincoln for some groceries and were quite bemused by emus walking across the road a few kms out of Coffin Bay. The area is surrounded by national park, so whilst not surprising to see wildlife, the casual saunter of the emus indicated that they are used to the humans driving their loud machines on wheels through their environs. The same can be said for the family of emus that strolls through the caravan park, close to humans who watch but don’t interact. Watching the sapphire blue waters as we explored Port Lincoln, we found ourselves staring keenly at the ocean, half expecting to see one of the Great White sharks the area is known for, cruise the surface for us to see. Obviously they didn’t get the memo, but the kids were all eager to know if they could do a cage dive to see sharks! They sure do have adventurous spirits!

Coffin Bay is famous for its oysters, and the oyster beds at low tide are fabulous to behold. Neither Paul nor Kirstine can stomach oysters (and yes, we’ve tried them), but the experience you can book, which gets you out to a seated platform area in the bay to shuck and taste oysters, would have been fun just to watch and learn.

A drive out in search of a geocache for the kids, took us to the fringes of the Coffin Bay National Park, for which you now have to purchase your day pass online. If only we’d had more time! If only we had a boat! Have you picked up that Coffin Bay has a lot going for it? Don’t wait for Summer to go. We had warm weather while we were there, and it was busy even in mid April.

There was no point putting off the inevitable as we left the Eyre Peninsula for Ceduna, and the Nullarbor. As we headed north, we marvelled at the long dry stone walls in paddocks, and looked longingly at the signs pointing to other beaches and highlighting the great fishing available. We know that there is so very much more to see, and Paul & Kirstine are already planning a return for a holiday. 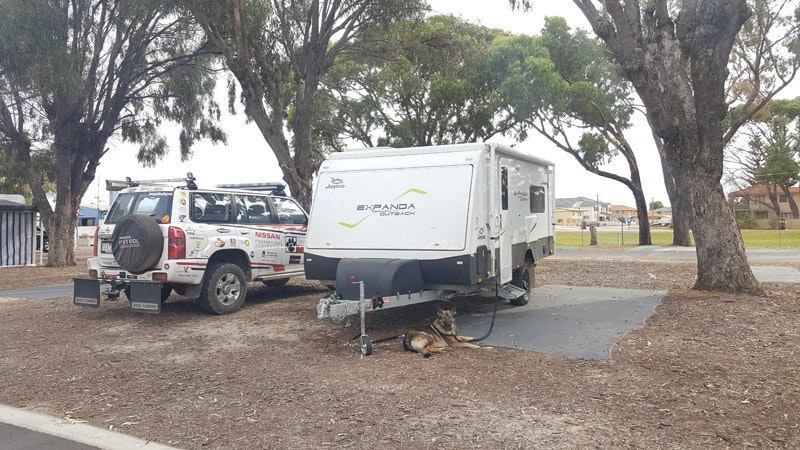 We went from the Eyre Peninsula to driving the Eyre Highway, which crosses the country and is most well known for the Nullarbor National Park. Already very familiar with the stretch of road after at least 5 crossings over the last few years, we are somewhat “Nullarbor Numb”, however we were looking forward to free camping in the Jayco. Sunsets, starry nights, and sunrises are stunning out here, and the first night didn’t disappoint. Paul got to practise some of his night time photography, and Kirstine was up at dawn to see sun rise above the foggy plains.

Our second night on the Nullarbor brought rain, and unpleasant odours from the drop toilets at the rest area we stayed at. There was a number of other campers there, some in tents, vans, cars, roof top tents. A couple near to us loved Luna and spoke at length with Paul about the intelligence of german shepherds. The young man wanted to play with Luna, but as the Nullarbor is full of warnings about the dangers of 1080 & strychnine poisons employed along this stretch, it was a risk we couldn’t take. Luna’s admirer understood this, as he has already had to assist others bury their dogs while he was in other areas on the east coast. Use of these poisons is contentious, and its fairly recent implementation in New Zealand is a cause of conflict and concern. Here in Australia, the poison is used to control feral animals such as foxes, wild dogs, pigs and cats. The problem is that the poison doesn’t discriminate, and companion animals who ingest it are handed a painful death sentence, their owners left traumatised. We had a close call in Queensland last year, which you may recall if you have been following our journey for a while. After overnighting at the fabulous Moonie Crossroads, our youngest daughter found a large piece of “something green” at the base of a tree at the rear of the Cub Camper. 1080 bait. Luna had been sniffing around that tree while on lead.

The next morning Paul got into conversation with a couple of ladies camped near to us. They complimented us on the kids’ behaviour and noticed that they each have their jobs to do around camp. The Legend had attracted their attention, and they were amazed at the support we have for what we are trying to achieve. These ladies, when they arrived, used a plastic bag to pick up rubbish lying around, and mentioned in conversation with Paul, that free camping is ruined by those who leave their rubbish and toilet paper at sites, when cleaning up after yourself is so easy! Cooper had the ladies in stitches as he described the process of “pooing in the bush” – digging a hole, pooing, wiping with paper, burying everything .. sounds straightforward doesn’t it? It is! It was the bum wiggle that Cooper did when describing the process, which sent the ladies off in fits of giggles, but they congratulated him on knowing what he needed to do in that situation.

Everyone should drive the Nullarbor at least once. Is the fuel & food expensive? Yes, but remember where you are! Take the time to stop and see the sights. Soon there will be whales playing with their calves in the Great Australian Bight. We’ve seen dolphins there too. There is nothing like seeing the concave section of coast line that most only ever see on a map. There’s no TV or internet unless you pay for accommodation. There are homesteads, blowholes, charismatic roadhouses, rehabilitated Wedge Tail Eagles, and the excitement that comes from driving across the country. This iconic drive is worth the experience. Make it yours. 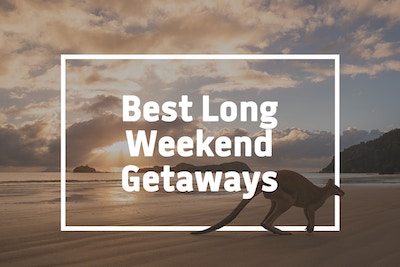 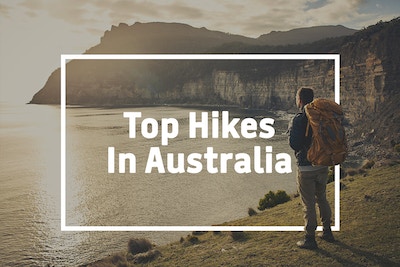 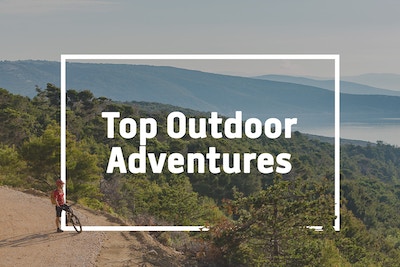